You’ll have to excuse Florida Sportsman founder and editor-in-chief Karl Wickstrom for being blunt about the destruction of our estuaries. Blame a lifetime of listening to excuses and lies about it.

That gives you 500 billion. The number of gallons of poisonous water our two coastal estuaries are served in wet years for the benefit of polluting agriculture and its powerful allies in government and their self-serving endeavors.

The unnatural discharges are even more in some years, less in others, but enough to destroy countless life forms in the St. Lucie and Caloosahatchee waterways. And recent scientific evidence indicates that we humans in cluster areas are dying as well, at a rate twice the national mortality for liver disease.

But, hey, aren’t we hearing constantly that a big reservoir and new treatment area will solve the crisis?

Sure it will, Virginia, and then we’ll sell you what may be left of North America’s most diverse estuary.

That great reservoir in the endless talk-talk stage unfortunately looks like it would be about one-fifth of what’s needed to tame the discharges, and even then relief is many, many years away. 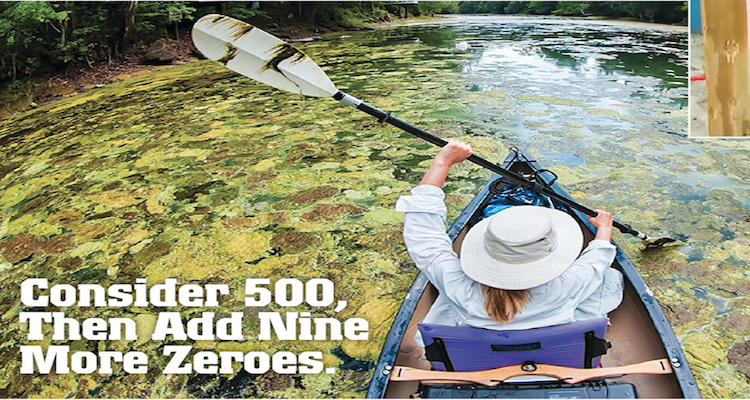 First there will be dazzlingly complex “modeling” using “acre feet” and such about which the public remains dumb-founded. Of course we can all go to night school to learn the jargonese that one acre foot equals 325,000 gallons of water.

The clever obfuscation goes on into the slimy night as we’re told that the toxic blue-green algae is actually caused by our septic tanks, never mind that there are hundreds of thousands of septic tanks statewide that do NOT reflect this level of pollution. Our leaders need a short course in critical thinking. Of course our better independent scientists already have taken the course, and even teach the principles of solid science.

The root cause of the toxicity that sickens the waters is known by a long word that reflects the destructive over-use of industrial fertilizers, mainly phosphorus and nitrogen. It’s a mouthful called eutrophication.

I hope you’ll read about it via search engine. I’d be happy to expound about it but then I’d have to go to that night school with you.