The latest from the VoteWater front

The VoteWater campaign hits the big screen with a statewide television campaign set to begin airing the first week of July on Fox Sports Sun. The commercial will air four times a week from July thru November. Fox Sports Sun, with over 8-million households in the state, hosts the most popular fishing and outdoor blocks of programming in the state. It is also home to several professional sports teams, such as the Miami Heat and Orlando Magic.

The commercial, which was produced by Stuart based production company Deep See Visuals, includes “I Vote Water” testimonials from a variety of people who care about the water. Spotlighting business owners, a mother and a doctor, is an attempt to show that no matter who you are and where you live in the state, you too should care about the water. And more importantly you should be caring with your vote.

Participating in the commercial (not professional actors) were Ed Stout, owner of South River Outfitters, Tyler Beck of White’s Tackle, Dr. James Vopal, a cancer specialist, Lindsay Potter, a photographer, and her son. All had their own reasons for “Voting Water”.

Full page magazine ads and social media campaigns will be added as we get closer to the August 18th Florida primaries.

Regardless of party or level of government there are a few elected officials and candidates that stand out as Water Warriors. “A Water Warrioris someone who prioritizes water over other important issues affecting Florida residents, they understand that managing the state’s water properly has impacts that ripple far beyond simply clean healthy water,” said Blair Wickstrom, a Bullsugar board member and VoteWater volunteer.

Over the next several weeks VoteWater will be releasing a select number of endorsements leading up to releasing the Voter Guide prior to the August 18thprimary elections in the state. “For many of these important local, state and federal elections the primary election is more important than the general election,” commented Ray Judah, Bullsugar Board member and VoteWater volunteer. “Many of these races will be determined in the primaries because of the party makeup and historical voting habits of the individual districts,” Judah said.

In the first two weeks of releasing endorsements, VoteWater has selected these candidates for the first ten:

Brian Mast, (R) US Congressional District 18: “I have led the effort across the state of Florida, and pushed the Army Corps, to lower Lake Okeechobee during the dry season in an effort to prevent discharges in the wet season. Operational change costs us nothing and has massive public health benefits.”

Jose Javier Rodriquez, (D) FL Senate, District 37: “Restoring the Everglades and keeping our drinking water clean is vital to the economic and environmental future of Florida. It is an honor to have the support of VoteWater/Bullsugar and to be a part of their campaign to protect our state’s natural treasures.”

Daniella Levine Cava, Miami-Dade County Mayor: “Now is the time for proven, trusted, and responsible leadership, and I am excited to bring a new vision of leadership to the County. I’m incredibly thankful for this endorsement as another sign of the broad coalition I am building to effect meaningful change and to build a better future for everyone who calls Miami-Dade their home.”

Nick Batos, (R) Lee County Commissioner, District 3: “A healthy environment results in long term economic prosperity and I recognize that restoring and protecting our water resources is critical to our tourism and real estate based economy. I feel that the people of Lee County have a tremendous opportunity to elect a candidate for Lee County Commission District 3 with experience in the private and public sector, and demonstrated commitment in providing responsible stewardship of our land and water resources.”

Delores Hogan Johnson, (D) FL House District 84: “As the Democratic ranking member of the Agriculture and Natural resources subcommittee, I am vocally supportive of the need to fully fund BMAP and TMDL monitoring and enforcement. The DEP has in the past been so underfunded and understaffed, they could not do their job but we have made strides and I will continue to push for complete funding and unified standards.”

Reinaldo Diaz, (D) FL Senate District 25: “I thought I always had a decent understanding on how Big Sugar buys their influence, but now that I’m playing this game I’m really experiencing it. The only response is WOW. My campaign will of course be sugar-free. The central focus of my campaign is removing this paid-for-influence practice because it is obviously the biggest detriment to the environment with the roadblocks to progress they are always putting before us.”

Joe Earman, Indian River County Commissioner, District 3: “My opponent is heavily supported by large out of county developers, that are looking to make their mark in Indian River County, as well as from from electric and solid waste corporations.”

Jo Neeson, (R) Martin County Commissioner, District 1: “As a former small business owner on the Indian River Lagoon, I have suffered enormous losses of income when our water is toxic. Fishing charters, bait and tackle businesses, restaurants, hotels, car rentals, boat rentals are just some of the many businesses affected by toxic water. It is the biggest detriment to our economy.”

Andy Mele, (D) FL House District 71:“The omnibus water bill of 2016 released agricultural producers in the Kissimmee River watershed from any obligation to manage their nutrient discharges. The bill replaced enforceable numeric standards with BMPs–and the BMPs still have not been completed. As a Waterkeeper, I have been promoting an end to the failed TMDL-BMAP system Florida employs to manage its water quality. I will be fighting for a statute in plain language, no weasel words, that requires water bodies to meet statewide standards, and if they don’t, the polluter pays.”

These efforts are powered by people like you who care about the future of our water. If you can, please chip in today to help us make this year’s VoteWater campaign a success.

Looking for ways to stay involved in the fight for clean water?

If you’ve ever engaged in a conversation about Florida’s Everglades, chances are you alluded to information found in “The Swamp” — the best-selling book that captures the destruction of one of the world’s most unique landscapes and the colossal environmental restoration project launched in an effort to save it.

Tune in at noon today for a livestream conversation with our partners at Friends of the Everglades. This Clean Water Conversation – Revisiting “The Swamp” will feature an exclusive interview with author, Michael Grunwald. CLICK HERE to join. 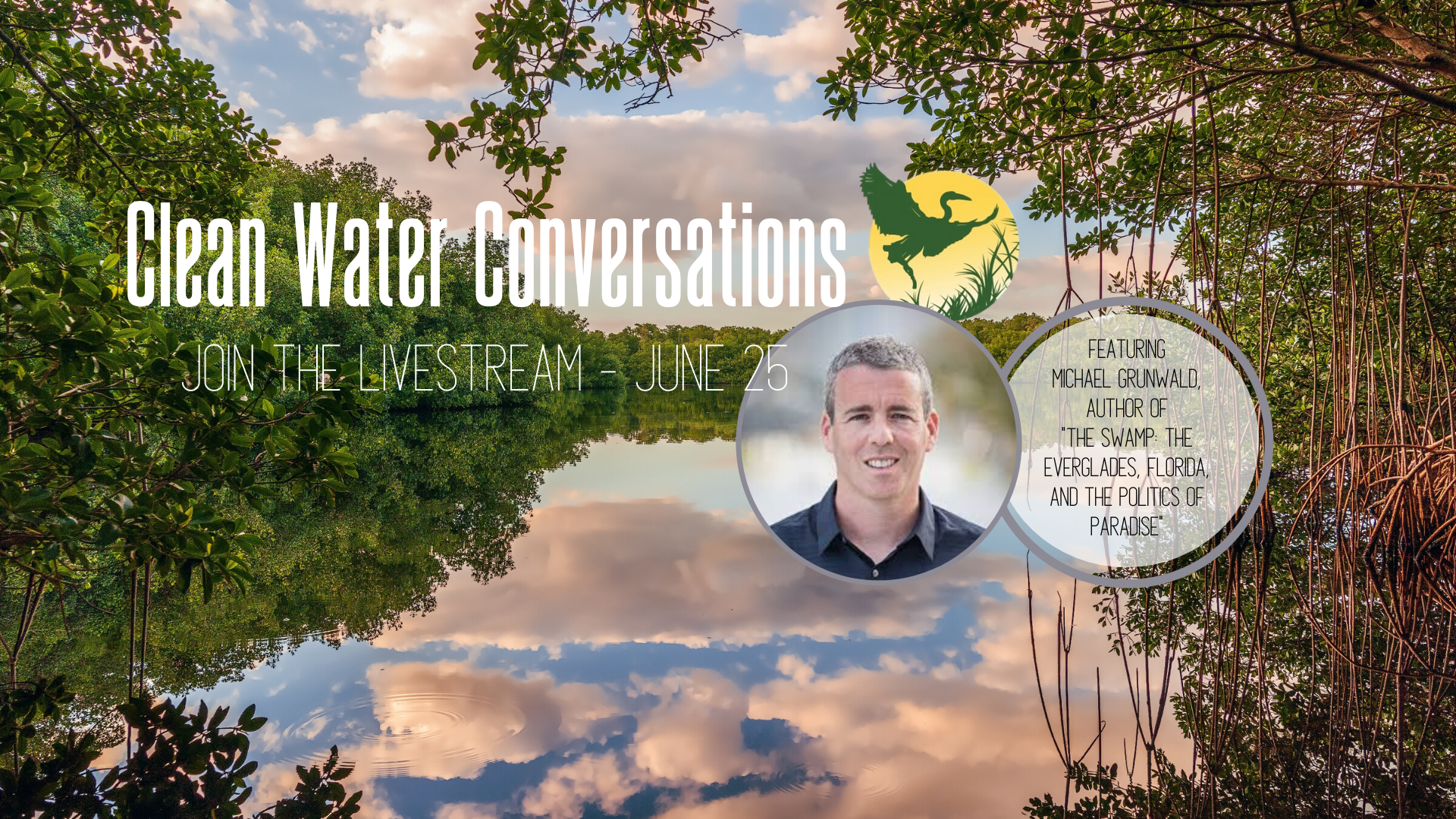