The Truth Is In The Water

Home>Uncategorized>The Truth Is In The Water
Previous Next

The Truth Is In The Water 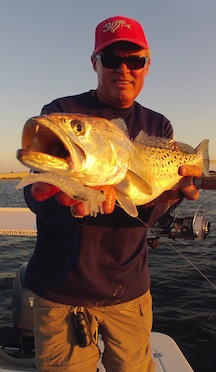 The Indian River Lagoon: trophy seatrout capital of the world.

Or, at least it used to be.

Mike Conner is no stranger to the brilliance of South Florida waterways. He speaks with the familiarity of a long-time angler and guide on the St. Lucie River and Indian River Lagoon, describing with reverence the beauty and the magic of a one-of-a-kind ecosystem that is responsible for some of the nation’s most iconic and prolific fisheries.

The front-row seat to the best this environment has to offer has a downside, and Conner grieves the unmistakable decline of waters that once offered the playground of his dreams and the site for a reliable, thriving business. Even during times of the year when the water is clear, and free of tell-tale signs of deterioration like the toxic green slime brought forth by Lake Okeechobee discharges, it’s the subtler clues that tell the story of devastation, caught by the eyes on the water that know it more intimately than most.

For Conner, nothing has offered a more obvious indication of an ecosystem in peril than the near-collapse of a once-dependable seatrout fishery.

“It’s the bellwether species, our true canary in the coalmine as far as inshore fish go. And it shouldn’t come as a surprise to anyone–this area’s been basically devoid of sea grass since the ‘Lost Summer of 2013.’” That year the lower Indian River Lagoon, like the St. Lucie, was blanketed by sediment-ridden black water from Lake Okeechobee. Since then, the estuary has suffered three more major discharge events. It’s been estimated that as much as 80% of the seagrass in the lower Indian River Lagoon has perished as a result.

Caught in virtually all of Florida’s inshore waters, seatrout have earned a reputation as a reliable catch and a kitchen favorite for years. More recently, numbers have taken a sharp dive, corresponding indisputably with a downward spiral in water quality and the loss of seagrass. Where flourishing grass beds once offered critical nursery habitat and foraging ground for the shrimp and pinfish that sustain the species through various stages of life, barren moonscapes and a type of clinging, red macroalgae now dominate. Without the habitat to support them, anglers are finding the voracious predators in fewer and fewer numbers–and lately, not at all.

Conner aims a pointed finger at poor operational management of Lake Okeechobee and the devastating impact on the estuary from years of discharges. He recounts times over the past decade where renowned stretches of prime fishing locations in the St. Lucie were covered by black water for five to six months out of the year. Each time the toxic water receded, he saw less and less seagrass fight its way back into existence. When the trout fishery followed suit, he made a decision to stop fishing for the species altogether, opting to put his clients on less-fragile targets to relieve pressure as the fish struggle to survive against mounting odds.

“No seagrass, no food sources, no protection for little trout…This estuary simply cannot support the numbers that it used to. The discharges have changed the carrying capacity for the whole ecosystem. I think the fishery needs to be closed, commercial and recreational, for a minimum of 3 years–and hope like hell that lake operations change in the meantime.”

He’s one of many anglers now advocating for a total closure on seatrout harvest here for a time by the Florida Fish and Wildlife Conservation Commission to allow the species a chance to rebound. In Southwest Florida, where coastal estuaries were ravaged by last year’s red tide, TC Palm’s Ed Killer reports that the call was already made, and FWC placed snook, redfish, and spotted seatrout over 20 inches on a catch and release only list late last year while researchers assess the impacts.

St. Lucie River and Indian River Lagoon anglers concerned by the glaring lack of seatrout will get their chance to advocate for the same or similar options when the FWC comes to town for its next scheduled meeting in Stuart this coming July. Conner hopes that as many as possible will take the time to make it. He’s taken to posting live updates from the St. Lucie that offer real-time water conditions and observations to help keep others informed. He hopes that more awareness will inspire a greater number of voices to band together in support of conservation measures for the regionally-important sportfish.

Not far north from his home in Stuart, Ft. Pierce waters still house the title for the heaviest spotted seatrout on record. Heralded as one of the top 50 record catches of all time by the International Game Fish Association, the 17 pound, 7 ounce trophy catch is a reminder of the truly spectacular fishery supported by this area. The trout that do remain here may still be enough to provide the anchor for recovery. But it won’t matter much if Lake Okeechobee discharges continue to wreak havoc on the seagrass habitat that fosters real survival.

Drawing the lake down in the dry season, potentially sparing the Treasure Coast from another toxic summer, might give this ecosystem and the creatures that depend on it a fighting chance, at least this year. Imagine the kind of progress we might see if this was implemented as a permanent solution.