SFWMD Can’t Find More Public Land. It’s Up to Us.

SFWMD Can’t Find More Public Land. It’s Up to Us.

The map below might be the best possible illustration of how little the public–taxpayers and voters–matter to the people who control our water.

This afternoon the South Florida Water Management District (SFWMD) board unofficially rubber-stamped a weak plan to send a little more water to the Everglades and a little less to the coasts. The Everglades Agricultural Area (EAA) reservoir plan hasn’t really changed in months–it’s the same sugar industry-friendly proposal unveiled this fall, with one tweak: sugar now gets ⅓ of the water for irrigation. After the deal was done there was a short pageant of public comments tacked on at the end. Once again the public got a symbolic voice in the room, but no real representation.

The public is never represented in the room where the deals are cut. During 2017’s parade of public meetings on the reservoir, fishermen, scientists, ecologists, doctors, small business owners, and a host of others raised concerns about the SFWMD’s plan: It failed to include enough land for treatment marshes, failed to do enough to cut discharges, failed to do enough to get clean water to the Everglades, failed to make cost-effective use of nearly $2 billion of taxpayer money. But the deal was already done, quietly negotiated between water managers and the sugar industry.

People from outside Florida are puzzled when they hear SFWMD has the power to sentence the Everglades to death. But Florida is different: This state grew out of the swamps–and continues to grow–by draining water and selling off land. Here, controlling the water means controlling the future, and Florida Crystals and US Sugar–already development powerhouses–control a future empire. A few billion in government subsidies every year means the industry can be patient, but that’s pocket change compared to the payoff for developing a property the size of Rhode Island. Everglades restoration projects like the EAA reservoir pose a threat to those plans, and no one has more authority than SFWMD to protect the sugar industry’s interests.

No one should be surprised that the district didn’t bend over backwards to do much for the Everglades or the estuaries. Its plan does just enough to placate lawmakers whose constituents’ homes and businesses and health are impacted by Florida’s water management crises. But it does a lot to preserve the sugar industry’s control of South Florida’s water.

So now the fate of our waterways again depends on land deals made in private. The EEA reservoir plan still doesn’t have enough acreage to clean a lot of water, which limits what it can do for the Caloosahatchee and the St. Lucie and Everglades National Park and Florida Bay. Since sugar executives have openly pledged “not one acre” for clean water, and state officials somehow insist they can’t find any land either–despite owning tens of thousands of acres in the EAA, much of which is bargain-basement leased for sugarcane production–we’re all left to figure it out.

The map below shows what Florida taxpayers own (outlined in yellow), roughly how much more acreage we need (solid yellow box), and where the reservoir site is (outlined in red). We own lots of farmland, conservation land, and land now cleaning up the sugar industry’s pollution. Independent scientists say we need 10,000-18,000 acres of marshes to make the EAA reservoir project work. Even SFWMD agrees, although the agency didn’t do much about it. 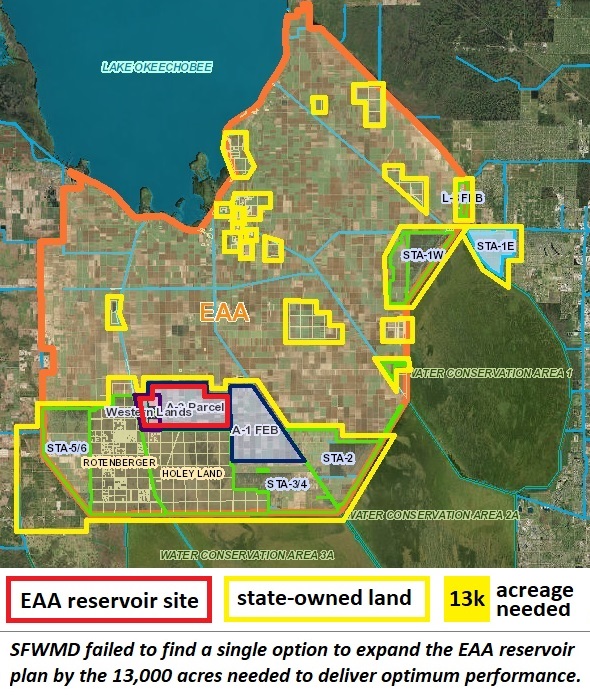 It’s up to people like us and lawmakers like Senate President Joe Negron to do the district’s job, to study the hydrology and the engineering, the real estate law and the policy history to identify land and broker a deal to rescue the plan. There have to be options. After all, what should be off-the-table when the alternative is the death of a national park and a world heritage site? Or the collapse of coastal fisheries that sustain a massive tourism economy and millions of jobs? Or the destruction of rivers that now carry toxic algae and risks of cancer and liver failure and ALS and Parkinson’s and Alzheimer’s into our communities.

We need more than a barely acceptable plan to fix this. We need heroes in state agencies and government to give the public real representation when these deals are made. Bullsugar and our partners in the Now Or Neverglades coalition have been spending our days talking to lawmakers, working frantically to find some of these heroes. Because god knows we’ve got enough bureaucrats in this story, and more than enough villains.