Rick Scott Panicked on Toxic Algae, But the Problem Won’t Go Away

Home>Uncategorized>Rick Scott Panicked on Toxic Algae, But the Problem Won’t Go Away
Previous Next

Rick Scott Panicked on Toxic Algae, But the Problem Won’t Go Away

A very big story, perhaps the biggest story in Everglades restoration, has been hiding in plain sight, but another year of Lake Okeechobee discharges carrying toxic algae is pushing it to a tipping point: Water management officials claim their top priority is human health and safety, but in truth the whole system is operated for the benefit of sugarcane.

Rick Scott’s June 20 press release and subsequent press conference (with state and federal water managers in tow) was a panicked reaction to Rep. Brian Mast’s letter to the Army Corps, just hours earlier, asking pointed questions about how and why decisions are made that repeatedly expose hundreds of thousands of Floridians to toxic algae linked to deadly diseases.

Scott, FDEP, SFWMD and the Army Corps (USACE) had been largely silent on the discharges, but in the immediate wake of Mast’s letter, they have abruptly changed water management operations, and they have doubled down on the claim that the system does in fact prioritize human health and safety by prioritizing flood control.

That is an outright deception, and with toxic algae in the discharges again, it is time for exposure.

The SFWMD and USACE conflate flood control for humans with flood control for sugarcane fields. They need to be separated and treated by water managers independently, with different levels of priority. Congress has the authority, and the moral obligation, to make this happen.

The CERP ‘savings clause’, a vague assurance to sugarcane growers made in 2000, is interpreted over-broadly by the SFWMD to mean growers get to dump their fields into the public system first, without regard to how it impacts everyone else.  Additionally, the USACE relies on the vague 1948 Central and Southern Florida project report to determine the priorities of the system, interpreted to mean sugar comes first always.

Draining 800 square miles of sugarcane fields grown in a bowled-out former swamp overwhelms the system, flooding out everything, which forces discharges east and west and even back-pumping.

Since the SFWMD lets the growers pump their private fields into public canals first, and the USACE is left to deal with the mess, it creates a weird situation where there is no single point of management. The sugar growers already got top priority by dumping first, and now the USACE is stuck with a choice between killing people in a flood quickly or harming and killing people with toxic discharges slowly.

State politicians blame the USACE for the ensuing crisis, but that is just theater.

It’s the back-pumping/back-flowing that really exposes the fiction, because letting canals flooded with sugarcane runoff flow into a lake that is at the same time being lowered in the name of dike failure risk is contradictory, if the safety of Glades residents is the top priority.

That question is specifically asked in Mast’s letter–because that is exactly what was happening the last few weeks: as they were discharging water out of the lake, they were allowing canals full of runoff to flow back in. In fact they abruptly ceased weeks of back-flowing just hours after Mast’s letter exposed the contradiction.

Shortly after that, we got the governor’s press release and conference.

The system has always operated like this, all while the sugar industry fought a long-term solution that could provide enough storage and treatment so that no one got hurt in high- or low-water times. Since they get top priority, sugarcane never gets hurt. The USDA crop reports tell that story clearly. If they weren’t always the top priority, maybe they would be willing partners on a long-term solution. 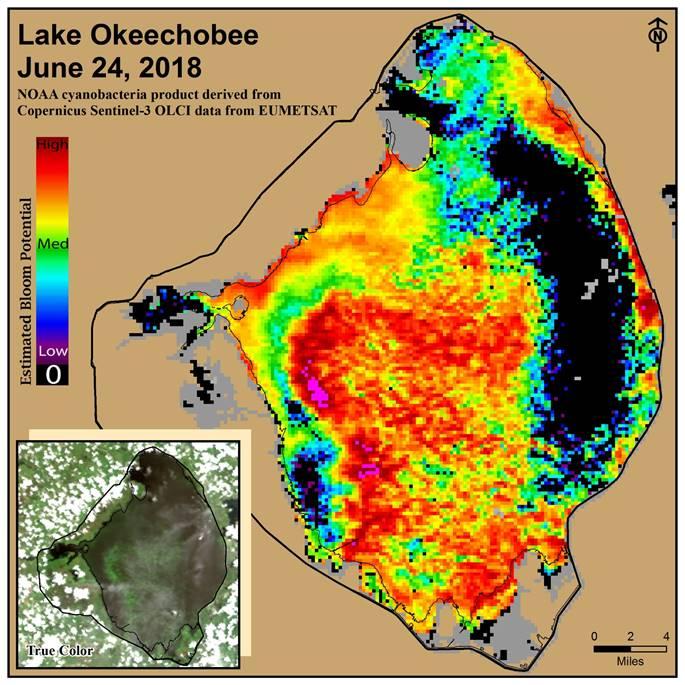 Toxic algae on the lake is a game changer because we know this stuff is dangerous, and if human health and safety truly is the top priority, then USACE must manage the system differently to prevent it from making people sick.

In other words, manage the system so as not to kill or hurt humans. After all, it is paid for with our tax dollars and run on publicly owned land.

That is why Mast’s questions–and more important, the USACE’s answers–are so critical. The sugar industry and the water management agencies fully recognize the importance of these questions.

We need the rest of Florida’s congressional delegation — and voters — to realize, too.