People around the country are watching Florida. They know about our water issues. They know our estuaries are collapsing. They know the Everglades are dying. And they want to help. 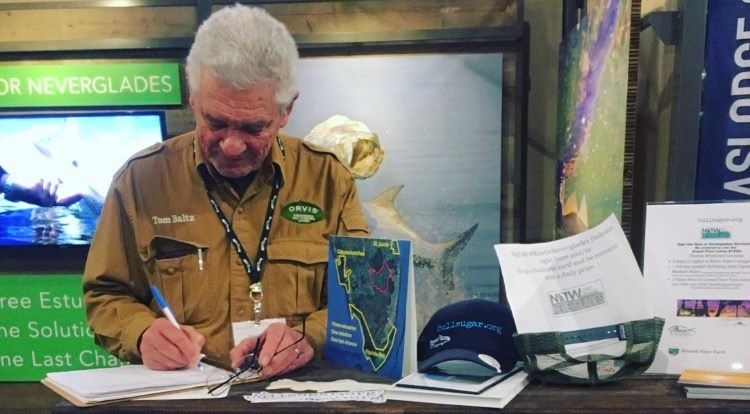 Those are some of the broad messages we’ve gotten from talking to hundreds of fly fishermen as partners of Patagonia at The Fly Fishing Show in Denver and Edison, NJ. So far nearly 1,000 have signed the Now Or Neverglades declaration. We’re hoping for even more support this weekend when The Fly Fishing Show heads to Atlanta.

Some more observations from hundreds of conversations so far:

Almost everyone knows something about Florida’s struggle for clean water, and how our fisheries are impacted. But people want to know more. Over and over we were asked, “Why isn’t this national news?”

Would they pay attention if it was? Yup. Almost everyone had questions: Where is the sugarcane grown, where will the reservoir go, where will the STAs go? How does the filtration work, how does the water get to the Everglades? Before he signed, a guide from Montana wanted to know how the process removes phosphorus. No one wanted the explanations “dumbed down.” Attendees were smart. They wanted answers.

They asked about economics, too. Do guides get compensated when discharges kill the fishery? Are chambers of commerce standing up for tourism? (No and no.)

Virtually everyone who asked questions signed the declaration. The most common reason not to: I already did. More than once we heard, “I’m sorry, I’m a government employee.”

The bottom line is that the world loves this place. People from all over want to come here, to support us, to experience some of the planet’s best fisheries and most unique wilderness. They want South Florida to win this battle, and they want to join the fight.

Our calls for clean water are echoing far beyond Florida. We have the world’s attention and some powerful allies are responding.