As Florida’s water crisis deepens, we need clean-water champions more than ever — elected officials willing to stand up to the powerful interests which for too long have thwarted real progress.

Omari Hardy, a former state legislator running for the U.S. House in Florida’s 20th Congressional District, has the look of a fighter. 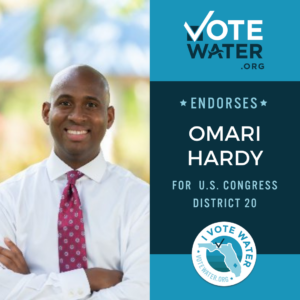 He’s VoteWater’s choice for the seat, formerly held by the late Alcee Hastings.

Hardy was among several candidates who responded to VoteWater’s survey by saying they would not take money from Florida’s powerful sugar industry. Several elaborated on their position, criticizing the industry’s political clout and its refusal to end the practice of sugarcane burning, which inflicts harm on the Glades communities south of Lake Okeechobee.

The resistance to Big Sugar we’re seeing in this race signals a tectonic shift in the heart of sugarcane country. Voters and candidates are no longer willing to be steamrolled by this environmentally damaging, taxpayer-subsidized industry.

Hardy stands out among the field of candidates because he’s already demonstrated he’s willing to do more than just talk.

As a state legislator he attempted to thwart a provision in Senate Bill 88, the so-called “right to farm” bill, that added “particle emissions” to the list of protected farming practices. Big Sugar wanted protection from lawsuits claiming harm from the “black snow” and smoke generated by the annual pre-harvest burning of the cane fields. Hardy proposed a series of amendments in an unsuccessful attempt to try and strip the provision from the bill.

He later explained to the editorial board of the Sun Sentinel newspaper that Big Sugar makes “a very serious effort to stop folks from holding them accountable,” and that he feels compelled to stand up “when multi-billion dollar corporations are harming the health of Black people and other people of color, and that’s happening out in the Glades.”

“Omari Hardy was an easy endorsement for VoteWater,” said Blair Wickstrom, VoteWater President. “When he was one of only seven state representatives to vote against Senate Bill 88, he quickly became a clean water advocate. When Hardy told the Sun Sentinel he ‘stood up to Big Sugar for burning hundreds of thousands of acres of sugarcane every year and harming the health of the residents in the Glades communities,’ he instantly became a health advocate.”

“He was instantly a VoteWater endorsement in my mind,” Wickstrom concluded.

Omari Hardy replied to the news of VoteWater’s endorsement: “I am honored to earn VoteWater’s endorsement. For too long, working-class folks and people of color in my community have been on the receiving end of policies that harm their health and livelihood. When elected to Congress, I will work to uplift and advocate for VoteWater’s mission to promote clean water, hold polluters accountable and stand up to Big Sugar. ”