Maybe There’s a Silver Bullet After all…

Maybe There’s a Silver Bullet After all…

“There’s no silver bullet” has been just about every politician’s soundbite at some point during Florida’s ongoing water management crisis. Red tide, toxic algae, human health risks, poisoned dogs, collapsing fisheries… somehow the equivalent of “golly, search me” passes for leadership, whatever the issue.

Do they think it reassures people to hear that our problem is not a werewolf? Or that they don’t have an answer?

Fortunately there are answers, and one in particular may be as close to a wide-ranging, near-term solution–AKA silver bullet–as we can get: Changing the way the existing system is managed, starting with boosting flows of clean freshwater to the Everglades in the dry season.

Earlier this month at the Everglades Coalition Conference, Bonefish & Tarpon Trust–a Now Or Neverglades founding member–opened people’s eyes to how devastating the current operations have been for Florida Bay and Everglades National Park. Today the park receives virtually no freshwater in the dry season, and only a fraction of what it needs annually to stay healthy. The results have been horrific: Soaring salinity led to massive seagrass die-offs, choking algal blooms, plummeting fish populations, and a generation-long recovery process…IF water conditions improve. 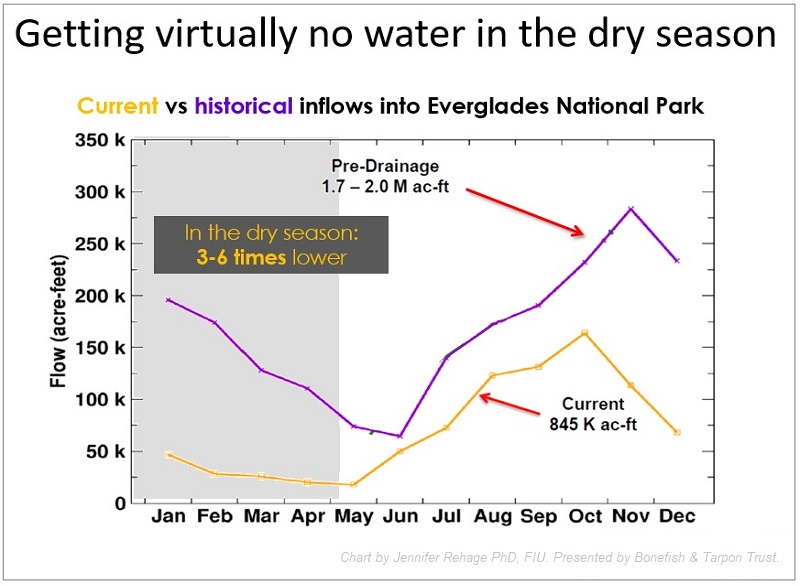 None of this needed to happen. An operational change could have taken advantage of unused system capacity to stabilize salinity levels in the bay AND protect communities south of Lake Okeechobee AND reduce discharges and toxic blooms on the coasts.

That’s because the 60,000 acres of state-owned filter marshes (STAs) that clean polluted water from the Everglades Agricultural Area don’t get much sugarcane runoff in the dry season. They’re largely unused right now, leaving capacity to clean water from Lake Okeechobee instead. And the existing canals available to carry water between the lake, the STAs, and the Everglades? Also largely unused this time of year.

The federal Lake Okeechobee Regulation Schedule (LORS) directs the Army Corps to use this season to lower the lake, making room for spring rains so rising waters don’t stress the still-under-repair dike. But currently the Corps and the state are passing up the opportunity to send excess water to nearly empty STAs. They aren’t releasing enough to balance salinity in the Caloosahatchee estuary, either. This cost Florida dearly last year when, on the advice of a faulty weather forecast, the Corps never got the lake down to its dry season target level at all.

So despite orders to lower the lake, and despite having unused capacity to clean and deliver freshwater to the Everglades and the Caloosahatchee, and despite both estuaries’ desperate need for freshwater in the dry season, the current system delivers almost none.

With the stroke of a pen our government could address three catastrophic water crises by simply adjusting operations. Using the system already in place. Without spending taxpayer dollars. So what’s stopping that pen?

In theory, nothing. In practice, two politically connected families whose loyal bureaucrats manage the lake to stockpile irrigation water for sugarcane. For 11 years we’ve let them hide this practice behind a temporary set of rules that were supposed to last 36 months.

That’s LORS, and it’s finally about to change. The Army Corps will hold a series of public hearings next month to get input from the public on how the current system impacts people’s lives and livelihoods. They’re starting with a blank slate: no assumptions that humans experience any ill effects at all, until they hear otherwise. Seriously. (Bullsugar will publish updates shortly on how you can participate most impactfully in this process.)

Another seismic shift in the system is already underway. In a few weeks Florida’s most powerful water authority will be governed not by sugarcane-friendly appointees, but by a new board tasked to manage this precious public resource for public benefit.

Collaborating to maximize dry season flows of clean freshwater to the Everglades and to send the Caloosahatchee the water it needs to stay healthy… it might not be a silver bullet, but it holds more promise and solves more problems than any other option, it’s achievable right now, and it costs just about nothing. Chances are it would still deliver every drop of water the sugar industry needs to flourish, too.

None of this means better operations can replace the need for more water treatment or storage projects to reconnect flows to the Everglades. But until we have the capacity to clean and redistribute enough freshwater to end toxic discharges and bring Florida Bay back to health, no other option offers more bang for the buck.

Or in the analogy of political soundbites, if this isn’t a silver bullet, maybe it’s at least wolfsbane?