Dedicated to stopping the damaging discharges into the St. Lucie and Caloosahatchee estuaries and restoring the flow of clean freshwater to Florida Bay. 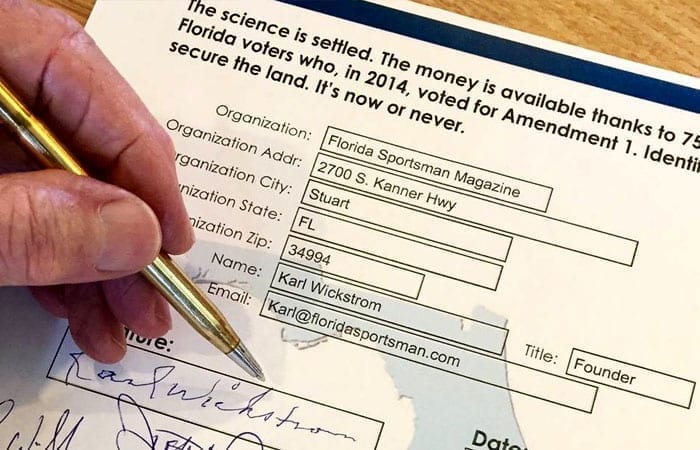 I support the 200-plus Everglades scientists who believe that increased storage, treatment and conveyance of water south of Lake Okeechobee is essential to stop the damaging discharges to the coastal estuaries; to restore the flow of clean, fresh water to Everglades National Park, Florida Bay and the Florida Keys; to improve the health of Lake Okeechobee; and to protect the drinking water for 8 million Floridians living in Monroe, Miami-Dade, Broward and Palm Beach counties.

Using Amendment 1 and other funds, we must identify and secure land south of the lake without delay, before development in the Everglades Agricultural Area (EAA) or other uncertainties condemn our waters to irrevocable destruction.

Three nationally vital estuaries are in long-term collapse due to the damming, diking and draining of the River of Grass. The Herbert Hoover Dike that contains Lake Okeechobee prevents fresh water from following its historic path southward through the Everglades.

Today, Lake Okeechobee is treated as an impounding reservoir constantly at risk of overflow. To manage lake levels, too much untreated fresh water is discharged into the Caloosahatchee and St. Lucie estuaries. Consequently, the lack of fresh water flow through the Everglades makes Florida Bay, the largest contiguous seagrass meadow in the world and crown jewel of Everglades National Park and the Florida Keys, too salty.

Additionally, sending water south would improve the water supply for 8 million people (1 out of 3 Floridians) by reducing the threat of saltwater intrusion into drinking wells and the Everglades.

The solution to all these problems is stated simply in a petition signed by 207 respected Everglades scientists on March 12, 2015:

“As a scientist working in the Everglades, it is my scientific opinion that increased storage and treatment of fresh water south of Lake Okeechobee, and additional flow from the lake southward, is essential to restoring the Everglades, Florida Bay, and the Caloosahatchee and St. Lucie estuaries.”

Estimates of land required are approximately 15 percent of the EAA, neither eliminating farming nor harming Glades communities. This amount is less than half of the acreage that U.S. Sugar has offered to sell to the State of Florida, in an agreement that remains in effect until October 11, 2020.

Water storage, treatment and conveyance in the EAA is the best option to reduce the damaging releases to the St Lucie and Caloosahatchee estuaries and to improve the water flow south. Especially considering the recent devastation to the coastal estuaries and ongoing massive seagrass die-off in Everglades National Park, planning for EAA projects must be expedited and be given top priority over planning for other new Everglades restoration projects.

We can’t keep kicking the can down the road. The costs and risks of further delay are staggering. Development plans in the EAA threaten to change the region, permanently severing the link between Lake Okeechobee and Florida Bay.

The science is settled. The money is available thanks to 75% of Florida voters who, in 2014, voted for Amendment 1. Identify and secure the land. It’s now or never.