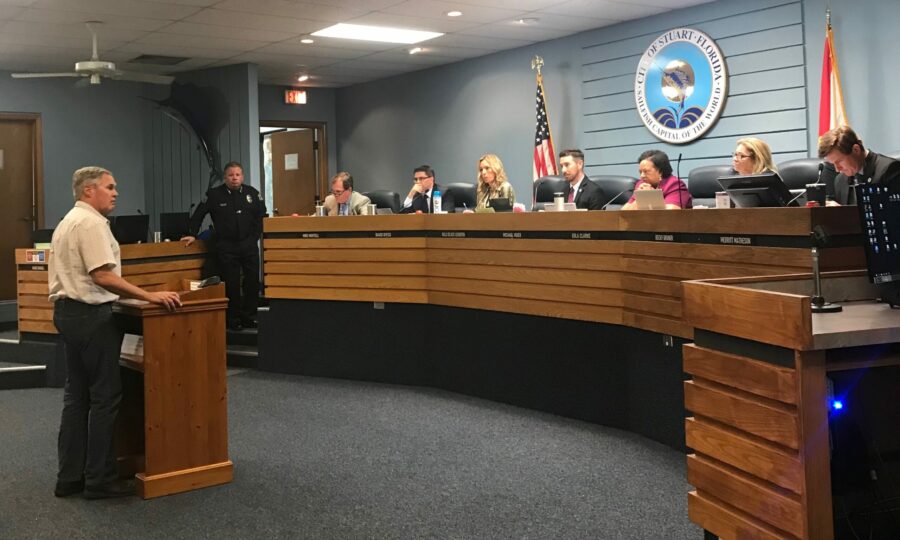 Can political will be infectious? We’re about to find out.

This Tuesday, the City of Stuart made a strong stand towards protecting the health of its citizens. Five out of five city commissioners voted to move forward with drafting a complaint to sue the Army Corps of Engineers over their announced 2020 Lake Okeechobee management strategy. The drafted complaint will come up for a new vote during the next commission meeting scheduled two weeks from now on January 27th.

On the east coast, Stuart sits at “ground zero,” downstream of Lake O where massive summertime releases have regularly robbed local residents of an otherwise paradise. Last year kicked off a statewide debate regarding the best management practices for the lake as the Army Corps began the process of designing the new Lake Okeechobee System Operating Manual (LOSOM). Thousands of voices weighed in, from the northern estuaries to the Keys, and the underlying message was clear and recurring: people were tired of being poisoned.

The Army Corps responded by breaking from traditional operational management. In an effort to bring down water levels in Lake O while the risk of toxic algae was low–thereby avoiding larger, more harmful releases later in the summer–discharges began early in the year, well before the start of the rainy season. The releases, usually an event mourned by downstream communities, were greeted with unusual optimism as hopeful Floridians everywhere held their breath and waited to see if the change in normal lake operations would be effective.

It worked. The operational flexibility used by the Corps last year brought indisputable relief to the St. Lucie and the Caloosahatchee, while also benefiting the ecological health of the lake itself.

That success could be built on. Right now, Florida’s taxpayer-funded stormwater treatment areas and water conservation areas south of the lake have unused capacity that could be taken advantage of to clean more water. Had the Corps used that operational flexibility to start discharges even earlier, the water that was flushed to the St. Lucie last February could have instead been cleaned and redirected south to benefit the health of the Everglades and Florida Bay. There was room for improvement but we were on the right track.

That’s why the Corps’ latest proclamation, announcing its 2020 water management strategy that would bring back a focus on water supply, felt like such a sucker punch. After such obvious success, the plan proposed for this season is a massive step backwards.

It was enough to hasten Stuart City Commissioner Merritt Matheson into action. The lawsuit he proposed drafting at Tuesday’s meeting was backed by U.S. Rep. Brian Mast and earned the support of his fellow commissioners, showcasing the shared spirit of representation for a community that’s refusing to be victimized any longer. That’s political will worth being proud of, and we hope it won’t stop there.

Time is of the essence. The City of Stuart has taken the first step. If they can carry that political will into the vote at the next meeting, they have a chance to set the tone for the rest of the state. Because while the political courage of one city might make a difference, the combined influence of political courage in many cities has the potential to change Florida water policy for the better, forever.

Bullsugar supporters can help. CLICK HERE to send a pre-formatted email to the Stuart City Commissioners and let them know you support their action against the Corps as a commitment to human health and safety.

Have you heard the news?

Marjory Stoneman Douglas’ legacy just gained a powerful new voice of leadership. Friends of the Everglades proudly Eve Samples as its new executive director. As the current opinion and engagement editor for the US TODAY-Network Florida, Eve brings an understanding of the issues surrounding Everglades restoration and a unique ability to communicate with the public. More information to come, following Eve’s official start date, February 4th.